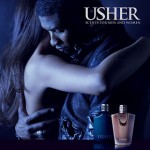 Usher Raymond IV, born on October 14, 1978 in Dallas, Texas, is an American R&B pop singer, songwriter and actor. This handsome singer has won 5 Grammy Awards and has sold over 21.5 million albums in the United States alone. He has his own record label called US Records is a part owner of Cleveland Cavaliers franchise. Apart from recording, Usher ventured into other businesses such as restaurants and perfumes.

Usher She is a modern fragrance for women. It has top notes of red currant, pink freesia and apple bloom with heart notes of Caribbean frangipani flower, apricot, pure and intensive scent of jasmine and rose. Finally the base notes comprise of sensual musk, amber, vanilla, incense and cashmere. This fragrance is for mysterious, sexy and self-confident women.

Usher He and She bottles are designed in forms of male and female torsos with simple lines and tops which are inspired by the ring that Usher wears on his hand. The bottles have the numbers 10/14 embossed on them which is Usher’s date of birth. Though these were his very first perfume launch, it’s definitely the right step towards realizing his dreams.

Another perfume pair by Usher was launched in 2008 called UR for Men and UR for Women. UR for Men is a refreshing aromatic fragrance featuring sea water, fruity notes, nutmeg, bay leaf, basil, Artemisia, guaiac wood, cashmere and sandalwood. The spicy touch to this fragrance gives it a unique scent; especially smells of basil and nutmeg.

UR for Women is a floral-fruity fragrance featuring peach, freesia, jasmine, osmanthus, honeysuckle, peony, woodsy notes, musk and praline. This fragrance is very delicate and amazingly feminine yet has a good lasting power. This perfume is soft and unobtrusive; perfect for daytime and evening outings. This perfume pair has got more acclaims than his first launches.

Usher as a singer has wowed million young fans all over the world. His songs have been on top of the charts several times and have captivated every wannabe singer. Until now, Usher has only four perfumes to his credit but have undoubtedly created rave among the young generation.

Usher really knows what smells good on people; especially young women. His fragrances have managed to take a place in the collections of many perfume fanatics. Just like his singing and acting career, Usher perfumes are definitely going to be one of the best in the fragrance industry. Usher colognes are also going to make it to the top of the chart just like his albums. His fans are eagerly waiting for his new launches; may it be his new album or a new fragrance!