Make a reach with CoTweet: Twitter launches its paid service! 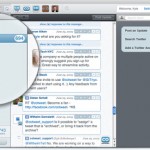 Twitter comes out with a new initiative of CoTweet to help various businesses to manage their accounts. But this will come only for those who pay an extra buck to make their presence felt on twitter. Yes, Twitter has extended its hand to some paying customers like McDonald’s, Ford and SunTrust to have a go on CoTweet service.

The San Francisco based establishment remarked sometimes back that a whooping $1.1 million, which was spent on funding, will make some of its offerings as ‘paid services’ in the coming future.

So it did. The new enterprise program will come to you no less than $1500 a month, said CoTweet’s CEO, Jesse Engle. Well if you are paying this much, definitely you are getting something good in return. Some services like storing the interaction data amongst users, tweets & retweets, replies, and messages for a long duration are worth a mention here for the paid users.

There is another trial version that will be available too, but you find some features missing there. Nevertheless you can still have a stint with it to know whether the CoTweet service works for you or not. However, the unpaid version of CoTweet, in disparity, can store the interacted data for only up to 14 days.

The new enterprise-program enables the users to get some analytical tools that exhibit the reach of their Twitter affairs, like how many times their tweets are being retweeted, what kind of queries they get usually and their average response time. Well this is also necessary for companies getting involved in the messaging services. The companies do realize that they need to make a reach than just let it be as a single person’s affair, when they join Twitter.

It is also worth a mention here that Twitter helps is injecting the life in the businesses even if there is no one to maintain your trade round the clock. This is just due to the fact that it manages to make the communication amid the service providers and buyers very vivacious.

One of the busiest fast food joints, McDonalds uses the CoTweet so as to have prompt solution to the queries generated by various customers across the globe. Along with this they also have their seasonal promotion offers and information about giveaways. They make sure that there is some person or the staff already assigned to do so. This makes the business more conversational.

The CEO also hinted that the initial group of enterprise program users, who belong to a non-competing arena, with the help of CoTweet, will resolve the future course of action about the services.

CoTweet is currently trying to add some extra features namely the facility for users to assign customer-service tickets and a mobile application along with which is due to release down the line. The company is also planning to extend support for other social-networking platforms, especially Facebook.

Don’t forget to leave your comments 🙂