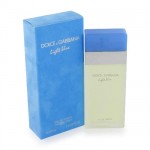 If you had to make a list of the best designer perfumes in the world then there is no doubt that Dolce & Gabbana is going to be among the top companies featuring in your list. Dolce&Gabbana was founded by Italian fashion geniuses, Domenico Dolce and Stefano Gabbana. Theirs was one of the most successful partnerships in the fashion industry. Dolce, born in 1958 near Palermo in Sicily and Gabbana born in 1962 in Milan, Italy is undoubtedly the most creative pair who has managed to have a huge celebrity clientele including supermodel Naomi Campbell and Kylie Minogue.

If you are the kind of person who loves the smell of nature then Dolce & Gabbana perfumes is the brand for you. You are sure to get the mystical fragrances from nature which is going to take you to a whole new world of ecstasy.

Dolce & Gabbana had already established them with their trendy clothing lines which are hot favorite among many celebrities. Later on they entered the perfume industry and announced their status as premier fragrance maker in Italy. Their status was rightly justified as their perfumes were so well known that even the people who never wore fragrances were enticed by the fragrances from Dolce & Gabbana.

The first fragrance of Dolce & Gabbana was the Pour Femme which catered to the sophisticated and trendy. Since then all their fragrances captivated the imagination of fragrance lovers and even the people who did not wear fragrances were lured enough to start wearing them. This was the kind of magic created by their enchanting perfumes.

The light Blue perfume was launched in 2001 by Dolce Gabbana line of perfumes. This was the kind of fragrance that gave you the feeling of spending a warn summer afternoon in Sicily. It had a breezy and casual fragrance that immediately caught the attention of people. The women who wore Light Blue perfume were absolutely fascinated by its fruity scent.

The fragrance is an enticing blend of fresh lime, blueberry, jasmine and other fruits. Now with this kind of fruity mix, who would not be enthralled by its refreshing fragrance? Moreover, this popular perfume came in an old-fashioned bottle with a light blue cap.

D & G Cologne had an interesting mix of citrus, lemon, cardamom and coriander which gives a masculine scent. This is indeed an unconventional blend of fragrances which is said to last for a long time. A spray in the morning would last the whole day giving you and your partner the refreshing smell of this fascinating cologne.

Among the other perfumes, D & G The One is one of the most popular fragrances for women. It is a casual wear fragrance with a very feminine packaging. Like the Light Blue perfume for women, D & G Light Blue Cologne for men also took off at a good start and was immediately revered by the men.
Well-known for their fruity scents for women and strong masculine yet soothing colognes for men have made waves in the perfume industry, the sale of Dolce & Gabbana perfumes and colognes especially Light Blue perfume alone is proof enough to show its popularity. People have absolutely loved the perfume range from Dolce & Gabbana making it one of the most popular brands in the fragrance market. Click here to see fragrances at up to 70% Off http://www.grandperfumes.com/dolce-gabbana-perfume/cologne