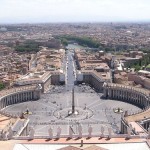 The social media is now making its reach to the church. True. Facebook, YouTube and Wikipedia advisories are briefing the Vatican administrators and Catholic bishops about current media scenario and the role of social media in this at a convention exploring the dangers and possibilities of the World Wide Web for the Catholic Church.

The Council of the Bishops’ Conferences of Europe (CEEM) has summoned the conference, which includes Internet and social media experts, bishops, an Interpol cyber-crime official and a young Swiss hacker. The voices of church being low at social activities, or say unsocial precisely have gone unheard. But it has been observed of late that Pope Benedikt initiated the efforts to keep with times by screening the church atop when it comes to social presence. The Church and the pope in particular are planning to launch a new YouTube channel sometime this year.

The minster of the latest era must be built on the Internet, said CEEM President Bishop Jean-Michel di Falco with his debut speech at the convention. He also quoted that it is the right time to get social with the church activities before a risk of cutting itself from the major part of people’s lives is posed. So the church must be engaged with the social media to reach many of its followers in various parts of the world.

According to di Falco, the Church can keep up a correspondence its mission and spread its message across if it takes a more active participation in its depiction through social media in a much better way. He also went on to remark that media often reduces a church to a pope and a few cardinals. Even more reason to give priests, bishops, and lay people a space on the social media.

So what do you think over this? Should the Church use the social media to make a reach to its followers or would-be followers?