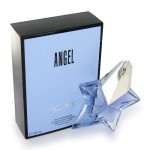 Angel perfumes look like they are right out of the alleys of Paris, at best. Known as one of the most romantic perfumes ever, wearing Angel perfumes would just be the best bet for your romantic interludes. First launched in 1992 for women, Angel perfumes have become the talk of the town following the exploits of Thierry Mugler, the conceiver of Angel perfume.

You would get all the information about different perfumes available under this brand at our site. Trust you should know a touch more about Angel and its tryst in the last 16 years. Knowing about them in detail should get you closer to buying these perfumes.

Thierry Mugler, the noted fashion designer and photographer is credited with the conception and development of Angel Perfumes. The groundwork for these scintillating line of perfumes started much before than 1992, the year when Angel, the first of Angel line of perfumes actually got released.

By the time Angel came on to the market, Thierry Mugler had already established a good name in the French fashion industry, which anyways in those times was very competitive. Having a solid fundamental base, Thierry could go all guns out to launch his line of fragrances. Launch did he, and what an outstanding line he had for years to come.

Starting right from the Angel for Women, and thinking of the latest launch of Angel, I do not recollect a single release that went without praise from the public. I mean, we are talking of releases like Angel Innocent, Angel perfume for men (A-Men) amongst others that became instant hits, not only in France but other countries across the globe.

Let’s get the ball rolling with knowing a bit more on Angel for Women, undoubtedly the first women-only perfume that won a lot of critical acclaim within days of its launch. And I am sure, no women is complaining of wearing this perfume that promises to sweep men off their feet. Surely, the men folks aren’t complaining either!

And why not! With honey, caramel and chocolate blended powerfully with notes of vanilla, sandalwood and patchouli, this has to be one heck of a romantic perfume. It indeed was, and women gave their nod to Angel for Women by taking to their fragrance. This 1.7 Ounce beauty of a spray soon got to be a part of most women’s vanity case, something that got to be indispensable sooner.

Why was the perfume such a hit especially with people who were romance-minded? Simple – The presence of chocolate and honey blend with vanilla was never tried in any fragrance before.

Thinking already that wearing Angel Innocent could make you feel like one! Not really, but this metaphor like brand name does enough justice to people who wear them. This is again one of those angel perfumes for women, whom men would have so much liked designed for them. Nevertheless, in this case it could be said, “Men’s loss equals Women’s gain”!

A nice blue box with some flowery words would welcome you to Angel Innocent, an innocent perfume for women who are simple-minded, though this is far-stretched. This angel perfume was launched in the year 1999, and soon found its way through a lot of online stores who started offering one discount too many for this perfume.

With a blend of mandarin, honey, almond, exotic fruits, musk, and amber, Angel Innocent had to make waves. This 75 ml Eau de Parfum did though get some saying that it was too fruity, but most of them did not complain at all.

Just so you are informed, our store offers a discount for all those who wish to buy Angel Innocent!

After Thierry Mugler’s successful run with Angel perfumes for men, a new line of perfumes was launched for use by men. It must be said that by now, women users far outweighed the possible number of men users, and it would at least take men some more years to get past their counterparts.

But for the sake of A*Men, let us leave those comparisons aside for a minute! This perfume truly is one of its kinds, and much like the angel perfumes for women; this one captivates the imagination, this time around with men. The packaging itself borders on dynamic and outrageously simple, with a black box and grayish fonts greeting the buyer.

As if this was not enough, what was inside the box needs more mentioning? The A*Men Angel Perfume was known to have Bergemot, Helonial, Lavender, Vanilla, Caramel, Chocolate, Musk, and Tonka Bean. Phew! That seems like quite a lot ingredients. But the men would definitely not wish to complain with women swooning all around them, when they used to wear this perfume.

At least the make of the perfume may sound sweet, and it definitely is one sweet scenting perfume. Just like the Angel Perfume for Women, some men who wore this perfume had issues with its too-sweet scent.

You may surely be excused of thinking that this is surely something from the outer world. The name “Angel Alien” sounds like one, but in fact is one of the best Thierry Mugler fragrances after the release of Angel For Women. And you guessed it right? This perfume is for women only.

You can get the Angel Alien in different sizes of 30 ml – 90 ml at different prices. You could also visit our online store to get this romantic perfume at a discount.

This and others! Angel perfumes for women, and Discount Angel perfumes for men, I must say have changed the whole perception of wearing perfumes. One must say that starting with Angel for Women, which seemed like an innocent effort by Thierry Mugler to the latest releases, Angel perfumes have indeed romanticized the fragrances domain.